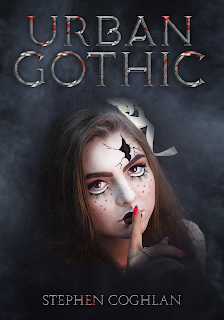 This is a novel by Canadian author Stephen Coghlan and is published by Kyanite Publishing. I had the privilege of being able to read an ARC (Advanced Reader Copy) of this fantastical story. This title will be available on March 8, 2019, and is currently available for pre-order.

Find out more about this story and where to purchase this novel here: https://kyanitepublishing.com/product/urban-gothic/

I’ll be honest with you, what first caught my attention with Urban Gothic was the incredible cover. I mean, look at that incredible cover by the talented Sophia LeRoux. It's no wonder it caught my attention and because of that, before I even read the blurb, I wanted to read this story. In fact, I totally forgot to read the back cover blurb before I read the story. I read it afterwards. I had no idea what story I was about to read, let alone what genre it was.

From the first line, this story drew me in. I was intrigued by Alec as Stephen painted a picture of his world that was wrought with pain and blood. A world that made me feel for Alec, that made me want to see something better for him.

I’ve mentioned it before, but I love strong character-driven stories. Stephen’s story is exactly that. A beautiful, heartfelt strongly character-driven story in the most wonderfully magical and fantastical world of dreams that he created. I couldn’t get enough as I raced through this story in a single sitting. I even let my coffee grow cold because I didn’t want to put the story down.

Each character he created was unique and real. It was clear the care he put into developing not just the world, but each of the characters – human or otherwise – that the reader encounters in the story. Their interactions drove the plot forward to what I think most will agree is a satisfying conclusion.

Let’s not neglect to mention the dreamscape that is as real as the characters the dwell within. Stephen’s talent for creating a vivid dream world and fantastic imagery will not go unnoticed by any reader. It’s the finishing touch, icing on an incredible story that will capture your imagination and make you think twice about those errant daydreams you create.

As for me, Stephen already knows my one critique of his story and he knew the controversy it could cause to those who live north of the 49th parallel. Be warned, my fellow Canadians, that Alec LeGuerrier is from Montréal and that means he is a Habs fan, but even if you’re a Leafs fan, I can guarantee that you will find yourself cheering for Alec anyway.

Leader of the Lemon Brigade

Crystal L. Kirkham
Crystal L. Kirkham currently resides in a small hamlet west of Red Deer, Alberta. She is an avid outdoors person, unrepentant coffee addict, part-time foodie, servant to a wonderful feline, and companion to two delightfully hilarious canines - Treble the Standard Poodle and Nahni the Australian Shepherd. She will neither confirm nor deny the rumours regarding the heart in a jar on her desk and the bottle of reader's tears right next to it Her current books, Road to Redemption & Depths of Darkness, are available on Amazon!